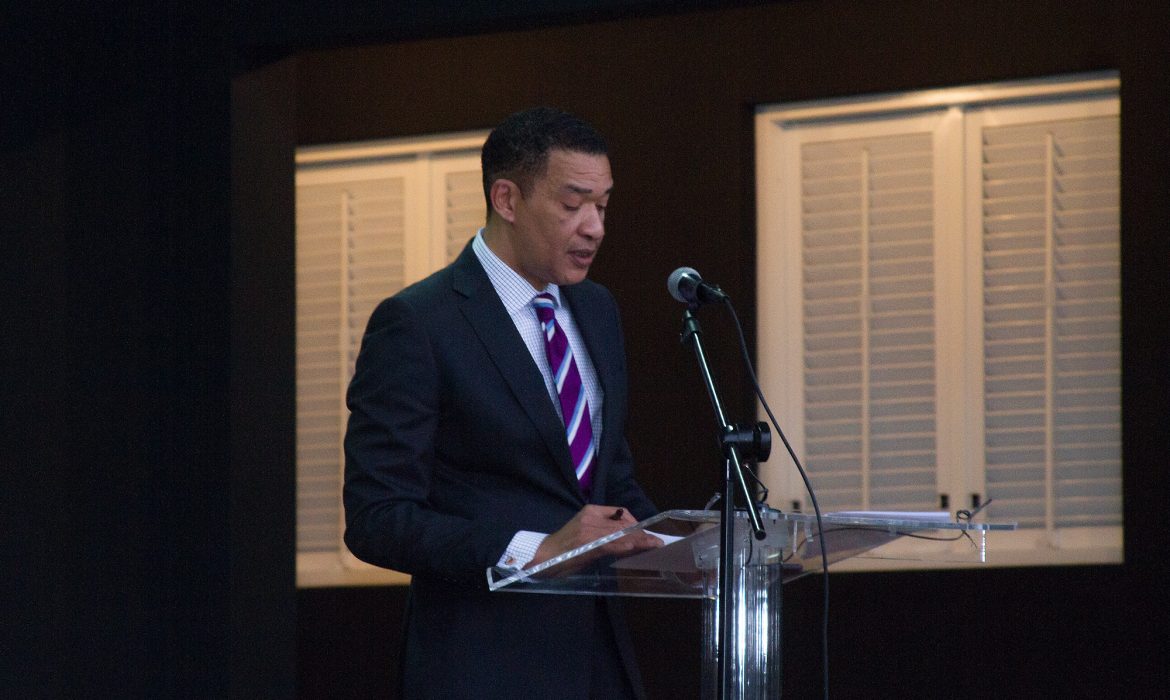 The acknowledged genius of Sir Andrew Lloyd-Webber is his ability to apply musical cadence to capture the political, social and human mood in complement to the lyrics penned by Sir Timothy Rice.

In Evita, there is a singularly poignant line of our heroine-fatale; in Eva’s Final Lament, she disdains public honour and asks that she be recognised simply as the “woman who brings her people to the heart of Peron.” Absent accompanying musical score, this is the rôle I adopt this evening; that of the simple advocate bringing the sentiments, aspirations and hopes expressed earlier this afternoon to your heart and minds.

It would be remiss of me if I did not acknowledge Sir Dennis Byron and Sir Trevor Carmichael who have spoken before. Our presence here this evening, the establishment and fruition of a Court for Arbitration and Mediation, has been built upon their unstinting efforts to develop Caribbean jurisprudence and Caribbean judicial process. Their selfless dedication to the cause of justice remains one of the core pillars for Caribbean development. They have both carved individual niches in their particular fields of endeavour but they share a common vision, and as a consequence imbue us with a belief and hope. It is therefore one aspect of that community of effort founded upon their efforts and the efforts of others that we celebrate this afternoon.

Investment and the Rule of Law

The Bingham Centre for the Rule of Law, published a report on Corporate Decision Making in Foreign Direct Investment; that Report identified from a survey of over 300 decision makers in the Forbes 2000 companies that “Rule of law conditions in host states can and often do lead to withdrawals or reductions of investments in states.” The Rule of Law conditions referenced in that Report includes – “access to justice … where rights may be asserted … through fair trials before an independent judiciary.”

The Caribbean region continues to struggle with structural constraints on investment. Of particular concern is the overburdened state judicial machinery which has resulted in unacceptable delays in the adjudication of commercial claims in particular. This situation continues to be addressed at many levels, and the establishment of the Arbitration and Mediation Court augments these efforts to enable the attraction and maintenance of investment with the region.

As noted this private sector led effort works in tandem with the prescribed rule procedures for Court annexed mediation and even as has been explored in Belize, the construct of Court annexed arbitration. The Arbitration and Mediation Court can and should be a part of the infrastructural framework which gives effect to these initiatives. This is a true PPP type structure as advocated in international fora as one of the possible catalysts for capital development and expenditure in financially constrained environments.

However in addition to being a catalyst for investment, it must be remarked that the establishment of the Arbitration and Mediation Court is itself a direct stimulus to regional investment and regional economic development. The proper functioning of the Arbitration and Mediation Court requires the application and development of productive skills and investment in a range of adjunct and ancillary services – including specialised legal services, technological services, translation and transcription services, and other administrative and secretarial services.

The Arbitration and Mediation Court is indeed an optimistic effort, but its goals are not unrealistic. It is conceptualised within the context of the specific economic development needs of the region, with legitimacy and acceptance enhanced through participation by the widest stakeholder base.

It is perhaps fair to say that they were opportunities for the earlier establishment, but nothing before its time. This is an indigenous Barbados and Caribbean effort developed internally and with the benefit of greater international legal and structural models as a guide.

I hope that the success of this Arbitration and Mediation Court is marked by its longevity; and that succeeding generations will at some time gather here at the Barbados Museum to mark with pride the 50th and even centenary anniversary of the institution.

The achievement of that goal requires our fullest support as a nation, and region, and I daresay individually. I take your presence here this afternoon as an expression of our individual and collective commitment to this endeavour.

That support must be evidenced by the legal fraternity embracing all aspects of alternative dispute resolution. I recall in my earliest days of practice negotiating an agreement that one attorney who strenuously argued against arbitration as a method for dispute resolution, based on his legitimate concerns as to costs involved in seeking resolution in the established international arbitration centres, and the fact that our legal framework did not assure the finality and certainty required in the process. This acceptance and adoption by the professional legal community requires at one level a paradigm shift in the legal practice to move beyond suspicion and doubt into acceptance. I would add a justified acceptance given the efforts of the Arbitration and Mediation Court to deal with these specific issues.

Further the mechanics of dispute resolution will need to be honed by legal practitioners specifically in the context of the procedures of alternative dispute resolution. At an international standard the practice of arbitration is different from the professional standards on display in our national courts and our lawyers will need to learn adapt to and adopt these international best practices in their delivery of service. To educate the client requires first that the legal professional be educated.

The legal service delivery must be augmented by judicial acceptance. Generally the wariness of courts before to acknowledge ADR mechanics must give way to the new dispensation, inscribed in the statutes which prescribe judicial non-interference. This will never be a call for abdication of the judicial office, but the recognition that the demands of justice are best served by according proper relevance and status to the ADR processes.

There must also be a constant legislative effort to revision of the applicable laws so that arbitration and ADR service delivery equate favourably with competing international rules. The ADR legislative framework and model laws are constantly evolving (as evidenced by the Delaware efforts towards expedited arbitration), and there will need to be a governmental recognition of the need to update laws where required to ensure the competiveness of our indigenous ADR regime.

Probably most importantly, the longevity hinges on the acceptance of our community. At a basic level, that community acceptance is based on the rules for the delivery of the ADR services prescribed by the Arbitration and Mediation Court and the judicial and registry processes adopted. These must satisfy the generally accepted international minimum standard and indeed surpass them. Further than that the community acceptance will be based on the ability of the Arbitration and Mediation Court to provide the highest levels of dispute resolution services efficiently and cost effectively.

Finally longevity and acceptance will require the Arbitration and Mediation Court to be financially sustainable. That financial sustainability is hinged upon membership participation. That membership participation has a direct income impact but it also assures that revenue is generated in the use of the Arbitration and Mediation Court.

I end this peroration by acknowledging the significant efforts of several persons and organisations involved in the realisation of the dream. In addition to the tangible support of government and state organs, we recognise the efforts of the Barbados Chamber of Commerce, the European Union, the World Bank and the International Centre for Settlement of Investment Disputes, the Faculty of Law of the University of the West Indies, and several other lawyers and other professionals who have dedicated their time to selflessly strive for this dream to be realised.

My penultimate act this afternoon is to formally introduce Ms. Baria Ahmed whom many of you have already had the opportunity to meet.

Baria is a UK qualified barrister, ADR professional and consultant and has worked in the field of dispute resolution internationally since 2003. Previously the Head of CEDR Solve, the leading ADR services provider in Europe, and having established her own consultancy firm in London, she boasts a clientele including the World Bank, the United Nations and the European Union.

Baria has a keen interest in cultural and jurisdictional influences on ADR and has worked in Europe, the Middle East, South and East Asia, Africa and the Americas, undertaking substantial research into comparative practices worldwide. Her experience in institutional development, particularly of ADR centres, both new and established, mark her as an expert in this field and she Baria has designed and delivered ADR Training courses both independently and as part of CEDR’s internationally renowned ADR Skills Faculty for senior legal, commercial and public sector professionals.

Her full curriculum vitae speaks volumes of the breadth of her experience and knowledge and it is anticipated that she will continue to play a pivotal role in the early development of the Arbitration and Mediation Court.

Ladies and gentlemen, I give you Ms. Baria Ahmed